Philosophy and the Humanities 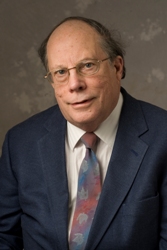 William McBride was born in New York City and received his A.B. from Georgetown University. After a Fulbright year in Lille, France, he pursued graduate work in philosophy at Yale University, where he received his M.A. and Ph.D. and then taught for nine years before going to Purdue. He was named Arthur G. Hansen Distinguished Professor of Philosophy in February 2001. Professor McBride has been a member and chair of the Committee on International Cooperation of the American Philosophical Association and, in the latter capacity, a member of its Board of Directors; was co-founder and first Director of the Sartre Society of North America; was Executive Co-Director of the Society for Phenomenology and Existential Philosophy from ’77-’80; was first Vice-President and then President of the Société Américaine de Philosophie de Langue Française between ’92 and ’96; and was President of the North American Society for Social Philosophy from 2000 to 2005. He was one of the two American members of the International Federation of Philosophical Societies (FISP) from 1998 to 2003, as well as a member of the Program Committee planning the quinquennial World Congress in Istanbul in 2003. There, he was elected Secretary General of FISP for a five-year term, the first American ever to occupy this position. He was then elected President for the following five-year term, 2008-2013, and in that capacity presided over the World Congress in Athens in 2013. He held a Fulbright Lectureship at Sofia (Bulgaria) University ‘St. Kliment Ohridski’ in the fall of ’97. He is a Chevalier in the French Ordre des Palmes Académiques. The most recent of Professor McBride’s 19 authored, edited, and co-edited books are The Philosophy of Marx (’77, reprinted ’15), Sartre’s Political Theory (’91), Philosophical Reflections on the Changes in Eastern Europe (’99), From Yugoslav Praxis to Global Pathos (’01), and Social and Political Philosophy, Volume 2 of the Istanbul World Congress Proceedings (’06). In addition, he has published over 250 book chapters, articles, and critical reviews.

Φιλοσοφια του βιου κυβερνησις is the meaning of the acronym ФВК, the oldest university honor society in the United States. The guide of life. I would like to think that this obtains today, or at least that philosophy is available to serve this function in most parts of the world. It is not a coincidence that the general theme of the most recent World Congress of Philosophy, held in August 2018 in Beijing and attracting several thousand participants, was ‘Learning to Be Human.’

Of course, philosophy as it is generally understood comprises a wide variety of other intellectual endeavors besides ethics: metaphysics, logic, theories of knowledge, and so on. It is readily seen to be relevant to aspects of new fields of inquiry, such as artificial intelligence and ecological inquiry. And numerous other disciplines, such as psychology, are, so to speak, more or less successful ‘spin-offs’ of philosophy, at least in the Western tradition. But in most traditions, Western and Eastern, the connection between philosophical thinking and ways of human life is an especially intimate one, thus making philosophy, as it were, the humanistic discipline par excellence.

FISP, the Fédération Internationale des Sociétés de Philosophie, includes over 100 national and international member societies worldwide, in virtually all regions of the globe. This organization, which was created, ultimately under the auspices of CIPSH, after the Second World War, has sponsored the quinquennial World Congresses ever since then. (The very first World Congress of Philosophy took place in Paris in 1900.) A study of the Congress programs over the years reveals a considerable evolution from an almost exclusively Eurocentric orientation at the outset to a more genuinely comprehensive image of philosophy as global — universal in its very diversity.

To be sure, this evolution does not amount to an abandonment of the Western philosophical traditions — far from it. Those traditions remain very prominent in the Congress activities, as they are in the curricula of many universities outside of Europe and the Americas. But the evidence from the programs suggests that, despite ideological and practical obstacles (e.g., the paradoxically greater costs of transportation to the Congress venues from many of the poorer regions of the world), there is a good-faith commitment on the part of the FISP leadership, which is itself very international as mirrored in the membership of its Steering Committee, to acknowledge the catholicity of the philosophical quest.

Not all philosophers, past or present, are equally adept at the task of learning to be human. There are, and always will be, those who insist that their particular methodology is the only true one — sometimes to the point of asserting that other approaches do not constitute true philosophy at all. (One might recall the insults hurled by those opposed to the philosophy of Duns Scotus in late Medieval Europe, one of the strange long-term effects of which has been the persistence of the pejorative term ‘dunce’ in the English vocabulary.) The FISP leadership has resisted this ever-present threat — with, I would like to think, considerable success.

What we support instead is a certain sense of a world community of philosophy, which could at its best serve as a model for the humanities as a whole. It transcends, while respecting, political and cultural differences, for all those who are open to, and take delight in, asking ultimate questions. The ‘globalization of philosophy’ is becoming more of a reality than, I would argue, at any time in the world’s past.

This scholarly activity is taking place against a potentially menacing backdrop of the exaltation of other forms of globalization, notably economic globalization; this in turn has led, in recent decades, to a widespread backlash against the term ‘globalization’ itself.  To the extent to which, in the minds especially of some (though by no means all!) political players, it is only the economic sphere that matters, the menace is real enough. This attitude often manifests itself concretely in the downgrading or even exclusion of the humanities in general, and philosophy in particular, from education and daily life. There are politicians and even some educators who consider technical training in management skills to be the highest goal of higher education. But the life that would remain, were this attitude to prevail, would no longer be a life worth living — as a famous ancient Greek philosopher, like his counterparts in China, India, and so many other parts of the world, was among the first to observe. Which demonstrates the centrality of philosophy to the panoply of human sciences: Philosophie et Sciences Humaines.