PhD geologist, researcher at the Italian Institute of Geophysics and Volcanology, her scientific activity concerns natural risks and hazards, and social aspects of Earth sciences. She is an international leader of geoethics, fully involved in the base research on philosophy of geosciences, focusing on ethical, social and cultural implications of geoscience knowledge, research and practice, and on key concepts for society such as sustainability, prevention, adaptation and geo-education. Professor at the University of Rome “Sapienza” (2008-2011), she is founding member and Secretary General of the International Association for Promoting Geoethics, Director of the School on Geoethics and Natural Issues, Councillor of the International Union of Geological Sciences, member of boards of several organizations and European projects. She is Editor in Chief of the SpringerBrief on geoethics, science writer and contributor of Italian newspaper/magazines, co-author of the “Geoethical Promise” and the “Cape Town Statement on Geoethics”. She has been awarded in Italy with prizes for science communication and natural literature. 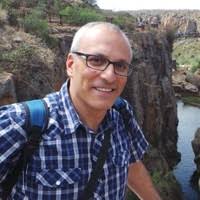 Geologist, technologist at the Italian Institute of Geophysics and Volcanology, his fields of experience cover engineering geology, geoethics, and philosophy of geosciences. He is co-founding member, treasurer, webmaster, and social media manager of the IAPG – International Association for Promoting Geoethics, webmaster and member of the Publications Committee of the IUGS – International Union of Geological Sciences, member of the Executive Committee of the CIPSH – International Council for Philosophy and Human Sciences. He was Task Leader in the European Horizon 2020 project ENVRI-Plus, and Team Leader of the Erasmus+ project GOAL (Geoethics Outcomes and Awareness Learning). He is member of the International Advisory Board of the European projects INTERMIN (International Network of Raw Materials Training Centres) and SMART EXPLORATION; convener in sessions on geoethics, author of articles in international journals and editor of books on geoethics.

Geoethics as a Point of Intersection of Humans’ Cultural Experiences

The great challenges of the contemporary world are the result of increasingly interconnected and complex human relationships, which can only be analyzed and addressed through close cooperation between science, technology, humanities and social sciences.

These challenges require solutions to mediate between interests, cultures, sensitivities, and expectations, which are often in contrast, identifying a reasonable and responsible alignment of values, capable of gathering a broad consensus.

Addressing complexity without focusing on common objectives and without a clear planning of actions to be undertaken could lead to delays in decision-making processes, and disagreements between the various stakeholders, affecting the effectiveness of the necessary interventions.

Global anthropogenic changes; increasing natural and anthropogenic risks; overexploitation of natural resources; alteration of bio-geochemical processes; pollution of the soil, oceans, surface water and groundwater, and the atmosphere; unsustainable technological and industrial processes; devastating fires at high latitudes and in tropical areas; significant reduction in biodiversity; as well as various types of zoonoses (including the one that caused the SARS-CoV-2 pandemic) are the effects of unsafe and unhealthy human development models.

Changing those models becomes essential, in order to guarantee, especially to the next generations, the conditions for creating their own future on the planet.

The scenarios on which to create the future of the human species are not conceivable without drawing on the heritage of culture, built and accumulated over time by humanity, which is a mirror of its identity and its potential, of its weakness and its strength, a subtle interface between its development and its annihilation, an immense creative act of absolute uniqueness.

Changing models implies changing the human beings who shape those models based on their vision of life, needs, aspirations, and their idea of the future. A change presupposes knowledge of what one has been, of what one is, of what one wants to/must be. Modifications in the organizational models of society, production mechanisms, methods of generation and movement of the produced matter and energy flows, of the supply chains, of technological, scientific, and cultural development, on which all human civilizations are well-founded, require knowledge of the human being and of the conscious and unconscious mechanisms that determine his/her decisions and actions. In this perspective, humanities and social sciences are indispensable tools of knowledge for critical analysis and historical and social framing of the real and potential, past and present human condition.

If it is true that nature does not need human beings for its existence, it is equally true that human beings with their culture cannot exist without nature. From nature we draw nourishment and resources, through nature we give meaning to our life and understand its most authentic aesthetic and metaphysical dimension. It is through the scientific method that we investigate natural forms, processes and dynamics, getting closer to understanding the mystery of the Universe. But it is thanks to humanities and social sciences that we grasp our most intimate dimension and the relationships between ourselves and the other-than-ourselves, and intuit the deep sense of our connection with our own nature and with the nature of the Universe. The future of humanity greatly depends on the dialogue and search for a synthesis between geo- and bio-sciences, engineering, humanities and social sciences, aimed at recomposing the ancient unity of knowledge and consciousness.

From this perspective, the ethical question becomes central in the contemporary world and perhaps it is the real problem, which should be addressed carefully and without radicalism, being aware of the double value of human diversity: on the one hand it can be an advantage for facing complex challenges that require the creative potential of as many subjects as possible, on the other hand it can bring about a fragmentation of human feeling and constitute a weakness when it is necessary to identify shared value frameworks to face common issues.

Without this awareness, science and technology alone could offer only a partial vision of the future: on the one hand, they could constitute the common ground on which to build global technical solutions, on the other hand they would not be capable of creating tools for enhancing the inner and emotional wealth of the human being, to grasp the social dimension of events and to reduce the inequalities that plague human communities.

Therefore, science and technology open up opportunities, but also enormous problems, which must be analyzed within an ethical framework that maximizes results for the benefit of an authentic, integral and responsible human development, while recovering that connection with nature which the human being has always sought.

If the globalization of markets and technological processes poses the problem of developing global ethics, planetary environmental problems — that are at the same time the cause and effect of a deteriorated relationship between humanity and the Earth system — require decisions that are built within a global ethics for the Earth, or geoethics.

It is evident that every concrete action aimed at conserving and protecting biodiversity and geodiversity requires the sharing of a solid scientific basis and the support of a set of reference values that is capable of offering itself in a convincing way, even in very different social, economic, and cultural contexts. In fact, problems with a global impact cannot be solved with limited local actions, which, although legitimized by the historical and cultural diversity of the various populations that make up the complex mosaic of humanity, cannot by themselves be proposed as common and decisive operational models.

Geoethics tries to overcome this fragmentation, proposing the Earth sciences as the foundation of responsible human action towards the Earth.

Geoethics consists of research and reflection on the values which underpin appropriate behaviours and practices, wherever human activities interact with the Earth system. It is conceived as a rational, operational and multidisciplinary language that can bind and concretely support a cohesive international community, engaged in the shared resolution of global environmental problems and complex challenges, which in fact have no national, cultural or religious borders.

Geoethics is therefore a field of interaction and comparison between different disciplines, aimed at investigating and improving human action so that it is translated into a real, integral progress, which allows the redefinition of the position of the human being in the Earth system, by promoting an ecological humanism that gives centrality to the principles of freedom, dignity, and responsibility.

The IAPG — the International Association for Promoting Geoethics (https://www.geoethics.org) — is the leader of this vision globally: the growing impact of its cultural and scientific activities and initiatives, carried out through a vast network of international relations, is demonstrating the success of its projects and proposals.