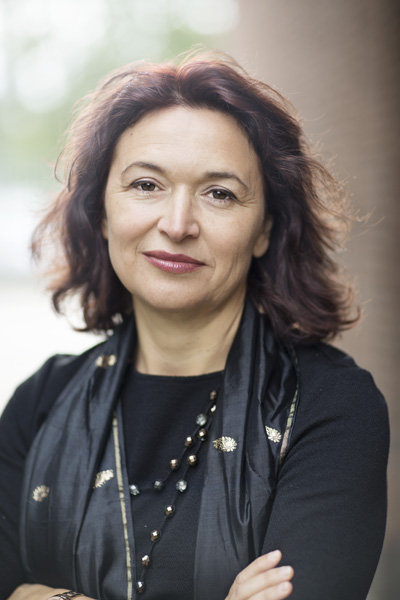 Sandra Ponzanesi is Chair and Professor of Media, Gender and Postcolonial Studies, at the Department of Media and Culture Studies, Utrecht University, NL. She is PI of the ERC project “Digital Crossings in Europe: Gender, Diaspora and Belonging” CONNECTINGEUROPE. The project investigates the relation between migration and digital technologies, focusing on how digital diasporas are created and performed in relation to issues of gender, ethnicity and affective belonging. It explores the way in which the ‘connected migrant’ contributes to new forms of European integration and cosmopolitan citizenship.

She has published widely in the field of media, postcolonial studies, digital migration and cinema with a particular focus on Postcolonial Europe from a comparative and interdisciplinary perspectives.

I am interested in the role of new humanities, which relate to fields which are conspicuously transnational as well as trans-disciplinary. By ‘new humanities’ I mean the investigation of those pressing societal issues that are addressed by three important ‘new humanities’ fields –– digital humanities, environmental humanities and legal humanities — all allowing for a better understanding of those rapid global transformations that exceed the jurisdictions of the traditional nation-state. Wide-ranging subjects such as critical digital methodologies and media technologies, environmental justice and pandemics, transitional justice and international terrorism can hardly be contained within national sovereignty or reduced to simple human agency. The postcolonial paradigm is my particular area of expertise and I use it to call upon and to tackle complex issues of interpenetration and co-dependency from the position of subalternity or minority, and to gauge the extent to which the humanities have been able to respond to these new challenges, which, for all their borderless character, continue to reproduce unequal relations between the global North and South.

The new humanities call upon us to reveal what is human about the humanities, reflecting on the humanities’ capacity to add cultural, historical and ethical weight to current problems (e.g. accelerated climate change, pandemics and refugeeism, problems that are sometimes seen as technical puzzles to be solved rather than as complex sets of social and cultural issues), and engaging in related debates (on e.g. the Anthropocene, algorithms or border management) from a postcolonial perspective that highlights both ongoing power struggles and deep-set vestiges of the colonial era.

Among the new humanities, my research has consistently engaged with the question of digital media and migration, which directly or indirectly involves and interrogates the field of digital humanities in connection to the other two new humanities fields mentioned above.

The emerging field of digital humanities (Kirschenbaum 2010; Berry 2012; Drucker, Lunenfeld, Presner and Schnapp 2012; Koh 2014; Risam, 2019) has received considerable attention in the last decade. Considered to be a new paradigm according to which humanities scholars embrace computational approaches to address fundamental questions in traditional disciplines such as history, philosophy, linguistics, arts, media, gender studies, postcolonial studies and literary studies, the digital humanities make an important intervention in the utopian debate on big data research. This field reclaims the right to contextualize, ground and theorize overlooked power relations in data collection, data cleaning and data analysis, especially given the fact that big data is never neutral or fully accurate, as ‘gender, geography, race, income and a range of other social and economic factors all play a role in how information is produced and reproduced’ (Graham 2012). Despite widespread enthusiasm for the enormous potential of digital databases, archived information, data mining, data scraping, automated bots, crawlers and the many digital tools that make it possible to visualize networks, design cartographies and pluck, systematize and typologize user-generated content produced in social platforms such as Facebook, Twitter, YouTube, Wikipedia and Flickr, the following basic questions remain unanswered. How are we to interpret and make sense of this information? What are the ethical implications of conducting data-driven research that not only infringes on the privacy of ‘users’, but also generates results and analyses that can be manipulated for other purposes? How are we to manage the exponential growth of data production and to tackle the related problem of sustainability implied in the increasing resources, global waste and energy needed to store, maintain and update data? (Confino 2014; Miller and Maxwell 2012) In order to confront these questions, the digital humanities need to enter into a dialogue with postcolonial theory so as to trace how power asymmetries are transcoded in computational language and the cultural analysis that emerges from it. The overarching task of postcolonial digital humanities is to disrupt the grand narrative of technological progress, which implicitly upholds a universal model of humanities based on white and male supremacy. More specifically, postcolonial digital humanities looks at how subalterns, migrants and other disenfranchised groups participate online, reflecting on the implications this communication holds for gender, ethnicity and religious faith as well as examining related problems of access, media literacy and language use.

In the ERC research project CONNECTINGEUROPE (Digital Crossings in Europe: Gender, Diaspora and Belonging), we focus on the users of technologies and not on the affordances or the technological solutionism and utopianism that is often foregrounded in digital media studies.

The approach is to study how new digital technologies have changed the experience of migration, in terms not only of mobility and connectivity, but also of transformed sociality, affectivity and intimacy. Therefore, the focus is not on the development of digital humanities as a set of tools. It is also not focused on the rise of data studies and algorithmic culture as inherently biased and instrumentalized for the sake of migration solutionism, border management and securitization. It is more about the ways in which technologies are understood as a set of practices. Technologies are not fixed tools or devices, but come into being through the engagement of their users, in my case migrant women, who through their digital practices negotiate their position of belonging and transnational diasporic affiliations, in interaction with, but not determined by, digital technologies, e.g. social media apps. Obviously, the critical awareness of digital access, competence and media savviness, along with surveillance and commercialization on the part of governments and high-tech companies, remain under scrutiny (Madianou 2019).

The project foregrounds an ethnographic approach that emphasizes the everyday dimension of diasporic digitality. It is important not to conceptualize the Internet merely as a medium or platform with specific affordances, but to pay attention to the ways in which the digital literally comes to life through the user’s participation, focusing on how people experience and contribute to the production of the digital realm. Ethnography can contribute to understanding digital media by situating it in particular contexts and making visible the socially diverse practices and engagements of different groups and generations, rather than focusing on the abstract capabilities of the Internet. As standpoint epistemology has argued, in contrast to technological determinism or media-centric approaches, the positionality of the user of technology is important for understanding what technology does/can do or mean, showing the entanglements between people and machines, and subjectivity and technology, as productively discussed by feminist thinkers such as Donna Haraway (1991; 1997) and Katherine N. Hayles (1999; 2005).

Koh, A. 2014. ‘Niceness, Building, and Opening the Genealogy of the Digital Humanities: Beyond the Social Contract of Humanities Computing’, Differences, 25(1): 93-106.